Skip to content
As you may have guessed by the name, Rishi is part Hindu …but that’s not actually why we picked the name. Being a mixed race baby we were keen to avoid traditional English names and to be honest, we struggled to find a name that ticked all of the boxes. We just happened on the name Rishi in an alternative baby name book and liked it and it’s meaning (ray of light).
In raising Rishi, we want to ensure that he is exposed to different cultures, particularly as he has Hindu and Christian heritage. I try to respect both religions and also create traditions of our own to carry forward in the future. It’s not as easy as I expected – they are very different with different beliefs, traditions and superstitions. I imagine it will be a process of trial and error but I think he’s fortunate to have these varied experiences from birth.
We have just celebrated Rishi’s first Diwali. Ordinarily, this would not have happened as we had lost my father-in-law earlier this year and so traditionally Indian families would not celebrate Diwali. We decided to make an exception as it was Rishi’s first Diwali and to mark the occasion subtly – with just us and my mother-in-law in a low key respectful way.
So what did we do?
On the day of Diwali itself, I dragged my husband and mother-in-law to a Diwali themed baby sensory class. It featured the Indian national anthem, Bollywood statues, Indian snooker and much more. It’s apparently the first time they have run it and it was a hit for us.  My mother-in-law loved seeing Rishi enjoying himself – and even heard songs from when she was a little girl.
We came home and exchanged gifts, and ate a lot of delicious food.

And then, had fireworks and sparklers…. 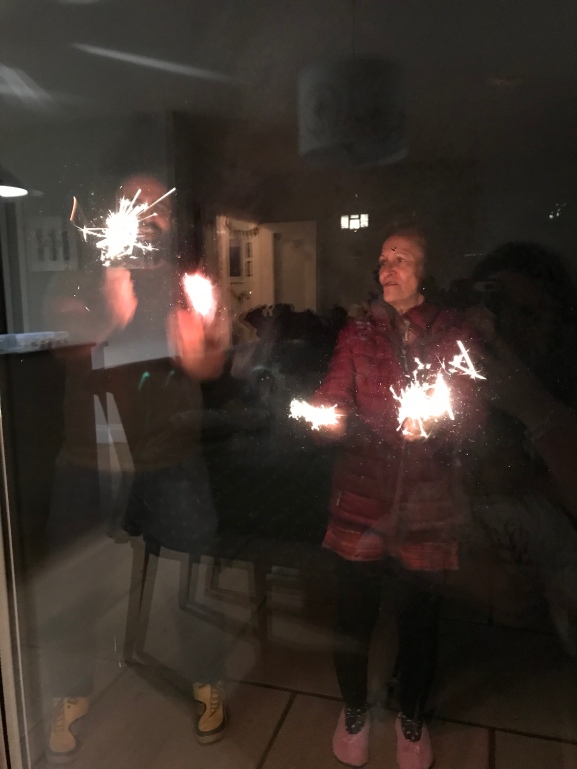 In the house:
Candles: As usual, we lit lots of candles. In addition to normal candles, we had a beautiful remembrance candle (bought online) for us to light on special occasions for my father-in-law, lit some traditional gee based candles, and had our initials up in lights.

Fun bunting: we hung rainbow bunting in our house. I ordered it off eBay to say “Happy Diwali”, but it could have very easily have been made at home (a great fun task with slightly older children).
All you’d need to make your own is:
– multi coloured card;
– star stencil;
– ribbon;
– scissors;
– glitter; and
– a hole punch and that’s it.
I will blame sleep deprivation (and the reality of what maternity leave is like) for not making it myself this time.

Rangoli: It is a Indian tradition where you create patterns on the floor using materials such as coloured rice, dry flour, coloured sand or flower petals. Unfortunately we didn’t feel this was practical in our home, so we bought a plastic set from Wembley to use year after year and laid this on our table for Diwali. We have had it out all week and got lots of compliments on it. It’s a nice modern take on something traditional.

Clothing: there are obviously Indian outfits for babies, but we found that a lot of them had high stiff collars which irritated Rishi’s skin as soon as we popped them on. So we opted for a smart outfit from Mamas & Papas for our visit to the temple earlier in the week and then I found a company online which made a personalised bodysuit with “ Rishi’s first Diwali” on it for the day itself. There is obviously so much out there which caters for a baby’s first Christmas, so it was nice that we could match that for Rishi’s first Diwali as well. 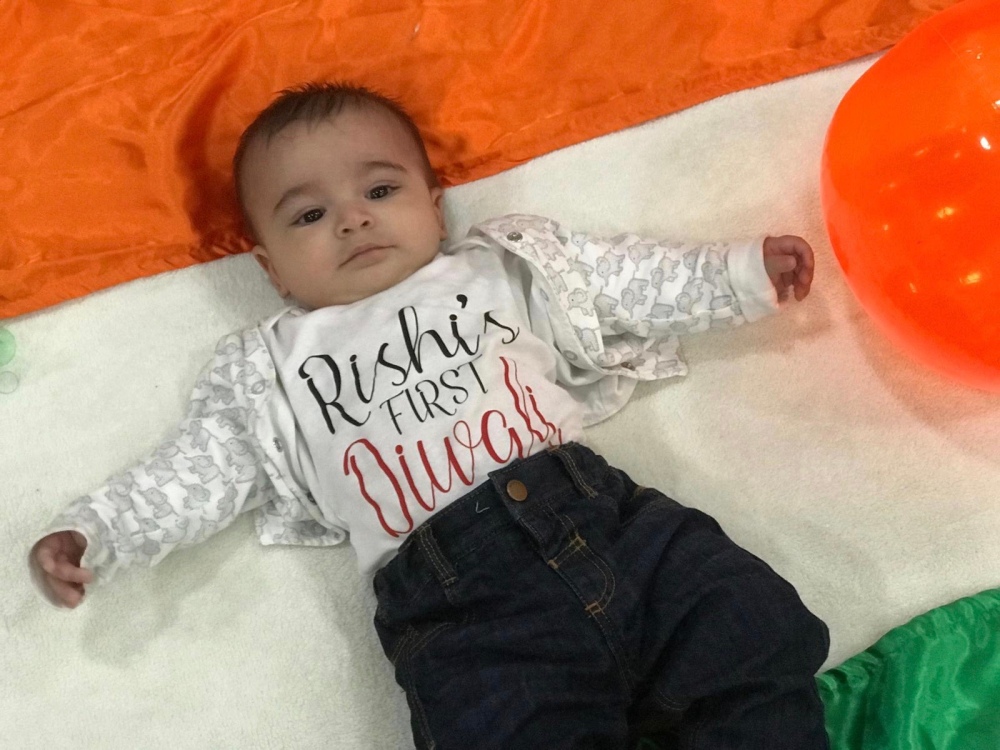 Suggested gifts:
I appreciate it is traditional to give money but we went for gifts instead. We gave his Grandma a canvas with a family picture and we gave her a babies book on Diwali – for her to read to Rishi in years to come. I thought that the reading of a book is a tradition that we can involve both sets of Grandparents in for Diwali and Christmas. We hope it will be a great bonding activity.
If you have older children, the Jai Jai Festival Series books are really good. I’ve already purchased the one on Diwali and plan to purchase ones on the other gods in the years to come. The books are really beautiful and they adapt traditional stories for young children to enjoy. 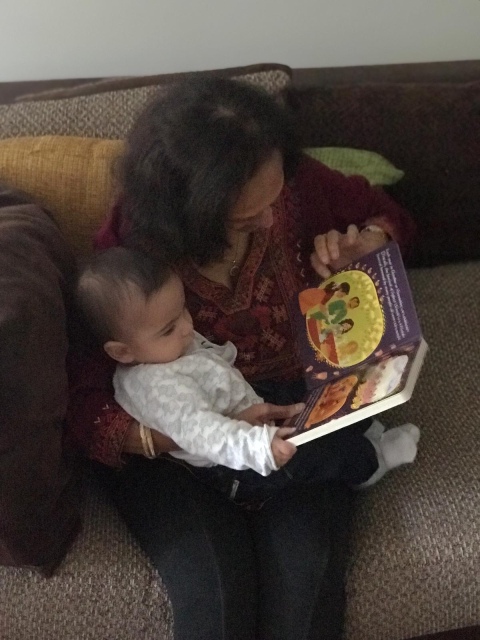 Weaning: at the moment my little one is still being breastfed but if you are weaning Diwali is a great time to get babies involved in what you are eating and to expose them to different tastes, textures and sensations. 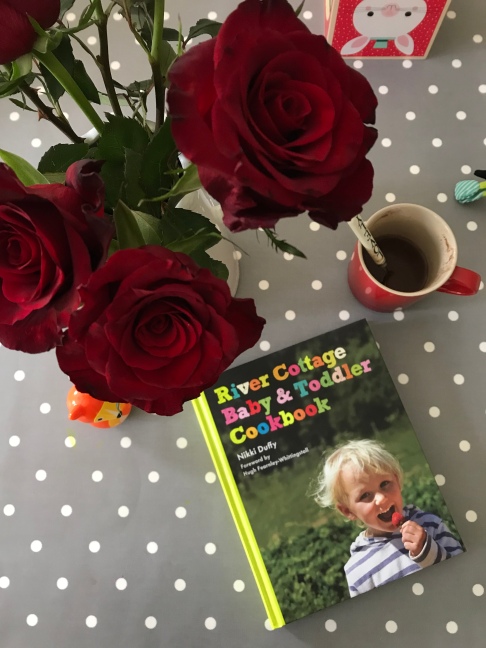 Here are my suggestions for foods suitable for your little one to enjoy the feast. I think it’s a great way to involve the family in the celebrations. The food over Diwali is the centre of the celebrations much like the fuss that’s made over Christmas Lunch!
Chilli paneer – Paneer is a great cheese for babies, and you mix this with peppers and tomatoes. If you add soy sauce to it, make sure that it’s a low salt version.
Potato dishes – Potatoes are great for babies and you can mix in aubergine or spinach. Flavour with cumin, garlic and coriander and it’s a taste sensation for your little one.
Rice – It’s fine in small amounts as long as you wash it before cooking.
Dahl – Lentils are a great sauce of protein so this is also a good option. You could have this with naan or pitta bread.
Chicken – you could have a spiced chicken dish (ie a dry dish, which might also be a little cleaner)! A chicken breast spiced with turmeric and coriander will be a great taste for your little one.
A curry – There are some great recipes in the River Cottage Baby and Toddlers book and these include a Lamb Curry and Veggie Bean Curry.
So while Diwali was low key for our family this year, I hope we can carry forward some of the activities, like the reading of a book, to future celebrations.  I’m sure the celebrations will evolve over time and sometimes we will get it wrong, but I’m keen to ensure he has exposure to both religions so he can share in what my husband and I have shared with our families in the decades before.