I’ve always wanted a family, dreamt of days running around after my children and blooming as a pregnant woman. I hadn’t expected my pregnancies to be some of the darkest times of my life, full of A and E admissions, weekly hospital check ups and being unable to leave the house.

During my pregnancies I suffered with Hyperemesis Gravidarum (HG). The symptoms can worsen with second pregnancies, and my second was certainly more severe and debilitating. While nausea and vomiting in pregnancy is common, on average it affects 70-80%. of pregnant women to some extent, HG is a condition at the extreme end of the pregnancy sickness spectrum. HG affects around 1% of women with pregnancy sickness and is very debilitating both mentally and physically, sometimes causing malnutrition, dehydration and other complications. 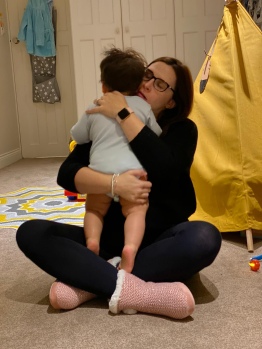 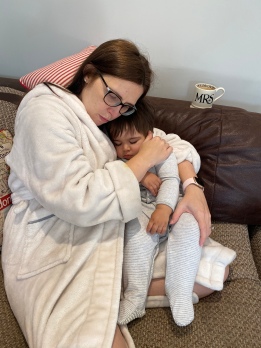 During my second pregnancy, the vomiting and nausea started at 5 weeks. I remember it clearly as we were celebrating my sons 1st birthday in Norfolk. We headed to the beach for the day and after about half an hour in the car I began to vomit into an empty carrier bag.  The sickness worsened and we cut the holiday short to come home and head to the doctors. They prescribed Cyclizine which has been used to treat pregnancy sickness for many years, but can cause some severe side effects. The medication helped reduce the vomiting (for the most part) but didn’t stop the constant nausea and gave me a whole new batch of side effects to deal with, including shakes, headaches and anxiety.  Little did I know that this was the tip of the iceberg. At 8 weeks and while still on medication I had an episode where I was sick 50times in 6hours and required admission to hospital. Whilst I was kept in overnight and on a drip, I was discharged early the next morning and told to go home. I was too weak to argue, but I was unable to walk out of the hospital. The rest of that week I was bed ridden – I couldn’t sit up, pick up my toddler or keep solid food down. I kept my fluids up as much as I could with the unrelenting sickness. This episode began my lowest time, my condition was so severe that I was unable to work.  I required 6 weeks off work and then made a staggered return to work. I was housebound. If you think lockdown is tough, try HG for your whole pregnancy. The drugs were so strong I became anxious, unable to string a sentence together and I was even too anxious to see close friends.

This was a wanted baby but I just felt like I couldn’t cope. My husband was incredible and after talking to Pregnancy Sickness Support we armed ourselves with information and at our next hospital appointment at 13 weeks we demanded more help and a change in medication. I was treated as an emergency and they changed my medication to Ondanestron. I can’t remember the name of my consultant during that appointment, but she transformed my pregnancy. At 13 weeks the illness really had reduced me to a shadow of my former self – anxious, full of self-doubt, and weighing a lot less than my pre pregnancy weight.  That change in medication was so important for me as it meant I no longer had to deal with the severe side effects on top of the HG. The fact that I had been on Cyclizine for 2 months when there a alternative without debilitating side effects out there still makes me mad.

The thing is that whilst medics know about HG, on the whole the ones I encountered didn’t know how to help sufferers or seem to understand that it can last the whole pregnancy. While the drugs helped reduce the vomiting for me, I still suffered with symptoms every day until the day I gave birth.  I was frequently told that I “needed to put on weight”, that I should “try ginger and lemon drinks” and on one occasion was advised to “try going without medication and see how bad it gets.” I felt like a fraud and that I wasn’t coping like other pregnant women.

Within hours of giving birth I was crying with happiness at the arrival of my baby boy and the relief of it being over and starting to feel better. Something I always feel very guilty about. 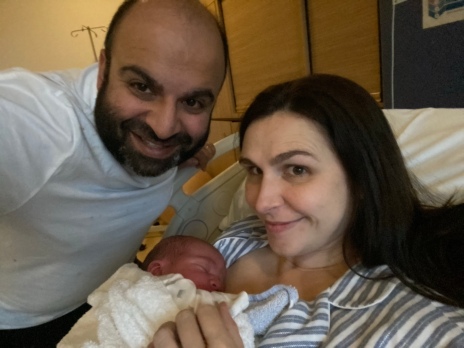 During this whole time, the effect on your support network cannot be underestimated. My husband was by my side through it all, my biggest support and greatest advocate. Looking after our toddler, me and working, took its toll on him too. The worry that this illness causes and seeing a loved one in so much pain, is bad enough, and made so much worse when that loved one isn’t getting the medical help they need.

I fought my way through every day of my pregnancies with my two wonderful boys. There were some very dark days when I thought I wouldn’t make it, that there was no way me or the baby would survive and there were some days when I thought I had done something wrong and asked “why me?” I adore my boys and I am lucky to have managed through two hyperemesis pregnancies, but that’s it for me. My body, mind and my family can’t cope with any more. It’s a cruel illness that leaves you trapped in your own body, on lockdown from the world.

If there had been something for me to watch or listen to help me understand that what I was experiencing wasn’t normal and to validate what I was going through, that would have made such a difference.  The worlds first Hyperemesis documentary, Sick, is being released so at least women who will suffer in the future will have that. I urge everyone to watch so you can see for yourself that HG is NOT morning sickness.